Times Square is a major intersection in Manhattan, New York City at the junction of Broadway and Seventh Avenue and stretching from West 42nd to West 47th Streets. The Times Square area consists of the blocks between Sixth and Eighth Avenues from east to west, and West 40th and West 53rd Streets from south to north, making up the western part of the commercial area of Midtown Manhattan. Formerly Longacre Square, Times Square was renamed after the Times Building (now One Times Square), the former offices of The New York Times, in April 1904. Like the Champs-Élysées in Paris, Trafalgar Square in London, and Shibuya in Tokyo, Times Square has achieved the status of an iconic world landmark and has become a symbol of its city. Times Square is principally defined by its animated, digital advertisements. The intersection of Broadway and 42nd Street, at the southeast corner of Times Square, is the Eastern Terminus of the Lincoln Highway, the first road across America. 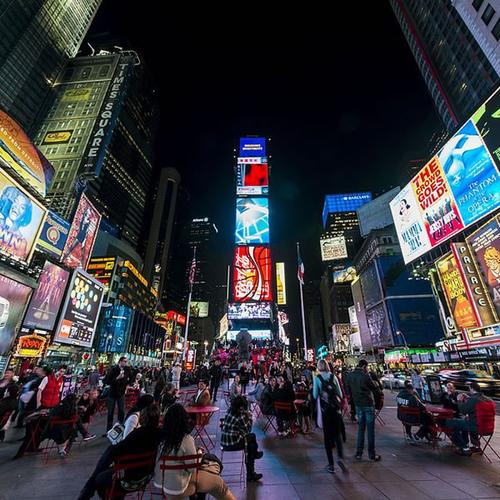